Cocktails and Couture Every Friday Night!

Wow! This event is going to be AMAZING!

Cocktails + Couture is a 13-week event every Friday that highlights the contributions of small businesses on the island starting Friday, June 6 in partnership with The Wave 92FM, Grey Goose Melon & Bacardi Mango. The goal is to bring together the Kona community for fashion, drinks, pupus, and entertainment, while giving exposure to Kona’s boutiques to encourage patrons to support local businesses. The band “Girls Nite Out” will be performing from 7-10 PM on every first Friday, and DJ “Boss Cutz” will be DJing from 10 PM-2 AM for a late night dance party every week.

On June 20th, we’re celebrating Summer Solstice, the longest day of the year, with a Glow in the Dark Party with Hot Buddhi Yoga! 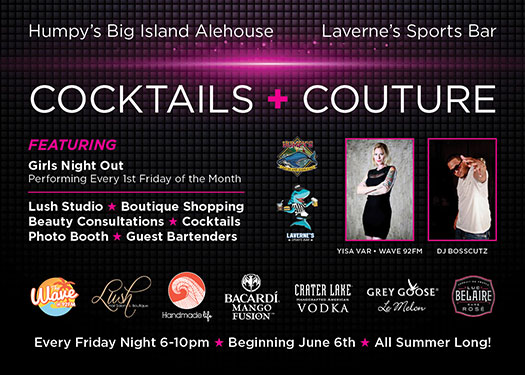